CEO & Director Chris Davies on 20 Years In Managed IT

It doesn’t feel like 20 years in managed IT, but then again it feels like 40 years as well. You sit back and take stock and give yourself a pat on the back without being too much of a wanker about it.

Do you remember why you decided to start Evologic?

I felt I had a purpose to improve businesses’ perception of the IT industry. At the time, in 2002, we were perceived as subpar when it came to service delivery, especially in the region of Geelong, after having spent time servicing large enterprise companies. There was a big opportunity to improve and we grabbed it.

What’s been the biggest challenge for you in the last 20 years?

It was definitely during the Global Financial Crisis (GFC) in 2008-2009. I now lovingly refer to this period as a pit of despair. During this time, we were growing rapidly, but to do this we were overdelivering and underpricing. We were hapless victims of success and we nearly ran out of cash. I had to buy my business partner out so Evologic could survive because we couldn’t afford to keep both of us. If I knew then what I know now that wouldn’t have happened, but you have to remember you did the best you could at the time. If we had put one more client on at that time we would have gone out of business. It was also a catalyst for our service structure which means we don’t lose money in a fixed service environment.

Evologic has a reputation for being a happy workplace, being officially certified as a Great Place to Work. What have you done to create and perpetuate this culture?

Don’t be a dick. It’s as simple as that. I’m getting biblical here, but ‘do unto others.’ There is a quote I live by which is “Be the leader you always wished you had” by Simon Sinek. I’ve created a workplace that I want to turn up to. How would I want to be treated? I ask, test, seek out feedback and communicate with my staff. Silos and working in isolation don’t build teams that trust each other. 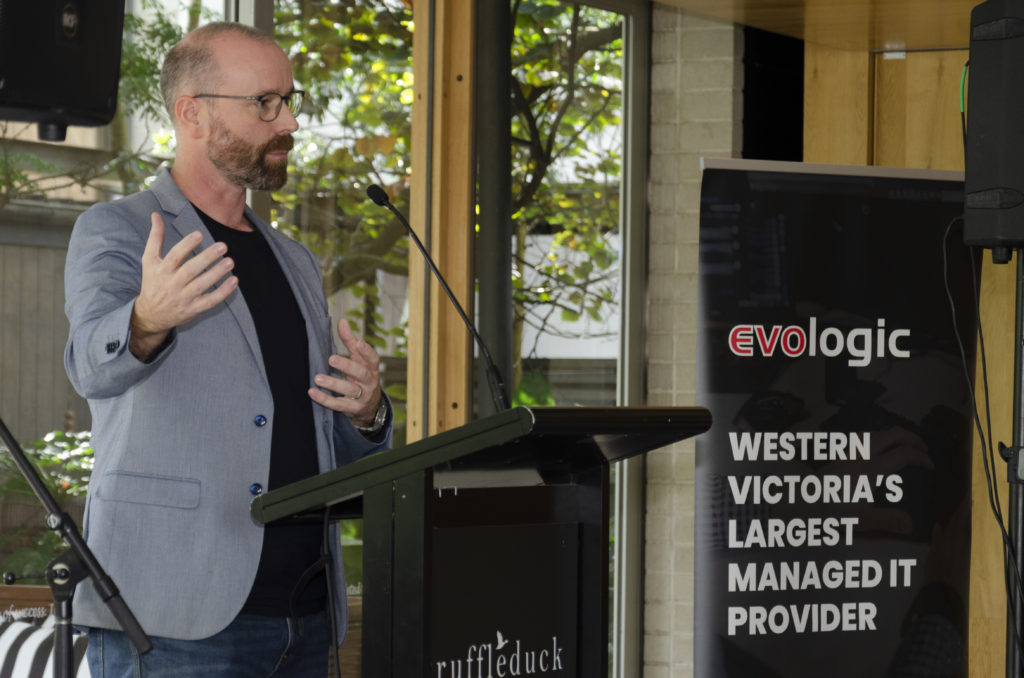 Chris Davies presents at the corporate partner lunch at the Geelong Chamber of Commerce.

Is there a moment you can pinpoint in your childhood when you knew you were destined to be a computer nerd?

There are stories of when I was younger of me pulling everything apart.  I also had a special ability that was not being able to put those things back together. I went to my high school reunion and someone asked me what I do. I said “I run an IT company”. He said “Of course”. I didn’t understand. I was offended. I used to have long hair and wear Hendrix t-shirts. Now when people ask what I do, I say I am a nerd-herder who employs people to push buttons. I use the term nerd endearingly of course.

What model and brand was your first ever computer?

We had a Dick Smith computer when I was in primary school. The most fun was the old Commodore 64 and the California Games. In year 12 we got an actual IBM PC which I upgraded throughout my university years. I should have kept it. It wouldn’t be worth anything but would have emotional value.

What was your first paid job?

Apart from delivering papers in high school, I was a waiter and barman and cook in the pancake parlour kitchen at Chadstone. I always look fondly at any resume that has hospitality listed under experience. It takes great resilience and social skills to survive and endure in a hospitality environment. It helps when you are trying to employ introverted nerds who can have real conversations with people.

Do you have a favourite computer game? Is there something you used to play non-stop as a teenage boy?

As a kid on the Commodore 64, I got into Arkanoid and the Last Ninja. Now my son has his Nintendo Switch and we bust out the Mario Kart. At his last birthday party, we drew out a round-robin for Mario Kart and had a knockout competition.

What version of Windows were you using when you started Evologic?

We were just moving from 98 to windows 2000. I was certified in Windows NT, so I always tell the team if they need anyone to sort out Windows NT issues, I’m the man.

Do you remember the average cost of a computer when you started out?

Between the $900 to $1500 range and it hasn’t changed much. My first computer at Evo was a second-hand Toshiba Tecra laptop. It was one of those old laptops that used to have that little red nipple you used as a mouse.

How many team members did you have when you first started?

It was just me and my business partner.

How many team members do you have now?

You’re considered a business mentor by businesspeople in the Geelong community. Who inspired you when you were starting out?

When I first started out, a good friend of my Dad’s was a Senior Manager at Nissan and he always had good advice on a few occasions. From 2006 onwards I joined a CEO institute and the chair of that group turned out to be a customer of the group we acquired. His name was Terry Wills Cooke OAM. He is a brilliant human being who wanted to help and we wouldn’t be here without him.

Are there any people in particular that you couldn’t have reached this milestone without?

My wife Ebony of course. When we were going through the GFC pit of despair, you recognise how much someone is in your corner. People say you can split your work life and your home life but you can’t. This became obvious during that time. She’s been my biggest fan and my biggest critic.

Is there a golden nugget of advice you can give anyone wanting to start their own business?

There’s so much talk about the grind and a lot about instant gratification, but remember it’s the long game. It’s about investing in your people and learning from your people which takes humility. Outlearn your competition and don’t reinvent the wheel. Keep yourself on a balanced continuum between humility and confidence. Don’t swing too far into arrogance, and don’t go too far into self-deprecation.

What do you love most about Evologic?

Making a difference for business but more importantly, the people. My staff. We provide opportunity and growth and jobs. We put food on tables. Cash is the byproduct and shouldn’t be the goal. You have to enjoy the journey. If you focus on the cash you take away from all of the good gooey stuff and getting to know the cool people you are hanging out with. If you don’t enjoy learning, you get left behind. There’s always more to learn, even after 20 years, especially in IT. 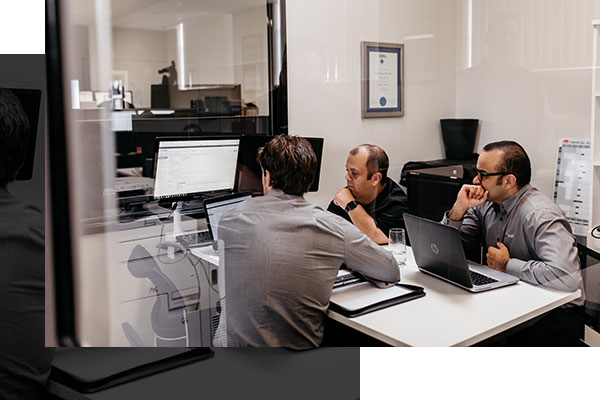 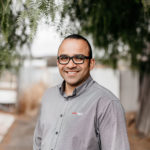